When does margin trading make sense? I often write on Quora.com, where I am the most viewed writer on financial matters, with over 491.7 million views in recent years.

When does margin trading make sense?

The vast majority of do it yourself (DIY) investors and even some institutional ones, get their fingers burned using leverage.

Using leverage in stocks isn’t the same as property or a primary business.

If you buy a property on leverage via a mortgage, you can get into negative equity in a worst case scenario, or even lose your home.

If you don’t stretch yourself too much though, all that matters is that the property goes up a bit over time.

In some circumstances that is enough to make it cheaper than renting, even though it is a misconception that renting is dead money. It can be cheaper.

US and some other stock markets have beaten most property markets long-term, adjusted for dividend reinvestment.

However, you have to factor in these things:

Where leverage can make sense is if you only use it when the indexes are down, and you have balls of steel.

If somebody had bought MSCI World or the S&P500 with leverage, every time there was a 20%+ decline and upped the stakes if the decline were 30%-50%, they would have made a fortune in the last half century and more, had they:

The majority of people should still avoid it though, as it requires a certain temperament, and in some ways the above isn’t “margin trading”, as you are aiming to hold the leveraged positions for a long time.

Too many people used margin trading like they were in the casinos in 2020–2021:

It can become more akin to gambling than investing, if used incorrectly.

We saw something similar in the tech mania of the 1990s.

How important is the will to succeed?

I was watching Netflix a few days ago.

Yes, it is dramatized, but on the episode I watched they focused on a story I knew about previously.

The former Harrods owner Mohammed Al Fayed was born during a time when the British ruled over Egypt.

He admired the British in some ways. His dad was furious and told him he can’t stand those who do so – “traitors”.

Al Fayed responded to his siblings that he can’t understand why somebody whose ambition, or will to succeed, only extended to his nose, had the gall to criticize others.

The answer to disliking the British was surely to beat them at their own game, or match them.

He subsequently went on to create a billion dollar plus empire, which included Harrods and the Ritz in Paris.

Many people laugh at his personality, and decisions, including trying to emulate others and changing his name to “Al” to sound more “upper class”.

In some ways it is indeed ridiculous and a sign of insecurity perhaps.

Yet would he have achieved what he ended up doing if he wasn’t like that?

I doubt it. Most people would take it easy after the first million, or certainty five or ten million.

His story might be extreme but he isn’t alone. One of the most popular UK podcast is the Dairy of a CEO.

The host is a “Dragon” on Dragons Den – the equivalent of UK’s Shark Tank.

Most of the guests say that they have had some trauma, or at least especially bad experience in life, which has given them a will to succeed.

Before I interviewed the Shark Tank judge Kevin O’leary last year, he mentioned a similar thing to me – he started his own business after he was sacked as a youngster on his first day for refusing an order.

For a young, insecure, person, that can be a tough pill to shallow, and he pledged he never wanted to work for somebody else again.

His story is not as extreme as Al Fayed’s perhaps, but it illustrates a wider point – if you are starting from zero and want to create something big, a will to succeed is very important.

This is especially the case because we live in a world where many people want to criticize, be naysayers, jealous etc.

Why are poor people usually more kind than rich people?

That is a big generalization.

People are people, we just make different decisions and get contrasting outcomes. The “rich” aren’t a monolithic group, and nor are the poor.

You will meet kind rich and unkind rich people, and the same for poorer people.

If somebody was unkind and poor, they will probably just become a bit more unkind when rich.

Likewise, somebody who was kind and poor will likely become even kinder when richer, as they will have more time and/or money to help others.

If you ask most people “would you change if you became rich”, almost everybody says no, so it is a mistake to assume others are different.

The media are often the ones who generalize about these kinds of things.

What is true is that more disagreeable people are likely to earn more and be wealthier:

Being disagreeable, and some of the other personality types associated with higher income and wealth, doesn’t mean being unkind though.

It just means having boundaries and being direct in certain circumstances, which saves you time and hassles, and therefore increases the chances of using time productively. 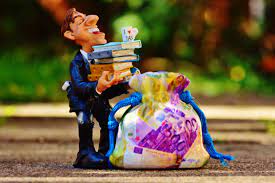